We love to travel and here we list the best travel quotes.

If you know some more, please add them as a comment… especially if you might have one, which you created on your own!

Get inspired to travel the world:

“I’d rather have a passport full of stamps than a house full of stuff.” – unknown

“Travel is fatal to prejudice, bigotry, and narrow-mindedness.” – Mark Twain

“I still have 8 years to travel…. then I will get a new passport!” – Melvin Böcher

“Don’t listen to what they say. Go see!” – unknown

“Who lives sees much. Who travels sees more.” – unknown

“There are no foreign lands. It is the traveler only who is foreign.” – Robert Louis Stevenson

“The world is a book, and those who do not travel read only a page.” – Saint Augustine

“When traveling, throw away the map & get lost!” – Melvin Böcher

“Borders…? I have never seen one… But I have heard they exist in the minds of some people…” – Thor Heyerdahl

“We wander for distraction, but we travel for fulfillment.” – Hilaire Belloc

“All journeys have secret destinations of which the traveler is unaware.” – Martin Buber

“Travel and change of place impart new vigor to the mind.” – Seneca

“Twenty years from now you will be more disappointed by the things you didn’t do than by the ones you did do. So throw off the bowlines, sail away from the safe harbor. Catch the trade winds in your sails. Explore. Dream. Discover.” – Mark Twain

“Once a year, go someplace you’ve never been before.” – Dalai Lama

“No road is long with good company” – Turkish proverb

“Travel brings power and love back to your life.” – Rumi

“I could give up travel, but I’m not a quitter!” – Melvin Böcher

“As long as we don’t die, this is gonna be one hell of a story.” – John Green

“Travel is the only thing you buy that makes you richer.” – Anonymous

“Travel as much as u free…” – unknown

“Once you have traveled, the voyage never ends… The mind can never break off from the journey” – unknown

“A journey is best measured in friends, rather than miles.” – Tim Cahill

“Travel is glamorous only in retrospect.” – Paul Theroux

“People travel to faraway places to watch, in fascination, the kind of people they ignore at home.” – Dagobert D. Runes

“For my part, I travel not to go anywhere, but to go. I travel for travel’s sake. The great affair is to move.” – Robert Louis Stevenson

“Traveling – it leaves you speechless, then turns you into a storyteller.” – Ibn Battuta

“The man who goes alone can start today; but he who travels with another must wait till that other is ready.” – Henry David Thoreau

“The gladdest moment in human life, me thinks, is a departure into unknown lands.” – Sir Richard Burton

“No place is ever as bad as they tell you it’s going to be.” – Chuck Thompson

“I am not the same, having seen the moon shine on the other side of the world.” – Mary Anne Radmacher

“Travel makes one modest. You see what a tiny place you occupy in the world.” – Gustave Flaubert

“To travel is to discover that everyone is wrong about other countries.” – Aldous Huxley

“Stuff your eyes with wonder, live as if you’d drop dead in ten seconds. See the world. It’s more fantastic than any dream made or paid for in factories.” – Ray Bradbury

“You don’t have to be rich to travel well.” – Eugene Fodor

“To awaken alone in a strange town is one of the pleasantest sensations in the world.” – Freya Stark

“Broad, wholesome, charitable views of men and things cannot be acquired by vegetating in one little corner of the earth all of one’s lifetime.” – Mark Twain

“Man cannot discover new oceans unless he has the courage to lose sight of the shore.” – Andre Gide

“The use of traveling is to regulate imagination with reality, and instead of thinking of how things may be, see them as they are.” – Samuel Johnson

“If you reject the food, ignore the customs, fear the religion and avoid the people, you might better stay at home.” – James Michener

“When overseas you learn more about your own country, than you do the place you’re visiting.” – Clint Borgen

“To my mind, the greatest reward and luxury of travel is to be able to experience everyday things as if for the first time, to be in a position in which almost nothing is so familiar it is taken for granted.” – Bill Bryson

“Life is either a daring adventure or nothing.” – Helen Keller

“Our happiest moments as tourists always seem to come when we stumble upon one thing while in pursuit of something else.” — Lawrence Block

“Stop worrying about the potholes in the road and enjoy the journey.” – Babs Hoffman

“He who would travel happily must travel light.” – Antoine de St. Exupery

“Every man can transform the world from one of monotony and drabness to one of excitement and adventure.” – Irving Wallace

“The more I traveled the more I realized that fear makes strangers of people who should be friends.” – Shirley MacLaine

“A mind that is stretched by a new experience can never go back to its old dimensions.” – Oliver Wendell Holmes

“Remember that happiness is a way of travel – not a destination.” – Roy M. Goodman

“Life begins at the end of your comfort zone.” – Neale Donald Walsch

“The journey not the arrival matters.” – T. S. Eliot

“Once in a while it really hits people that they don’t have to experience the world in the way they have been told to.” – Alan Keightley

“One’s destination is never a place, but a new way of seeing things.” – Henry Miller

“I haven’t been everywhere, but it’s on my list.” – Susan Sontag

“Nobody can discover the world for somebody else. Only when we discover it for ourselves does it become common ground and a common bond and we cease to be alone.” – Wendell Berry

“Two roads diverged in a wood and I – I took the one less traveled by.” – Robert Frost

“There is no moment of delight in any pilgrimage like the beginning of it.” – Charles Dudley Warner

“It is not down in any map; true places never are.” – Herman Melville

“All the pathos and irony of leaving one’s youth behind is thus implicit in every joyous moment of travel: one knows that the first joy can never be recovered, and the wise traveler learns not to repeat successes but tries new places all the time.” – Paul Fussell

“Our battered suitcases were piled on the sidewalk again; we had longer ways to go. But no matter, the road is life.” – Jack Kerouac

“A wise traveler never despises his own country.” – Carlo Goldoni

“We travel, some of us forever, to seek other places, other lives, other souls.” – Anais Nin

“A journey is like marriage. The certain way to be wrong is to think you control it.” –John Steinbeck

“No one realizes how beautiful it is to travel until he comes home and rests his head on his old, familiar pillow.” – Lin Yutang

“Your true traveler finds boredom rather agreeable than painful. It is the symbol of his liberty-his excessive freedom. He accepts his boredom, when it comes, not merely philosophically, but almost with pleasure.” – Aldous Huxley

“For my part, I travel not to go anywhere, but to go. I travel for travel’s sake. The great affair is to move.” – Robert Louis Stevenson

“Traveling is a brutality. It forces you to trust strangers and to lose sight of all that familiar comfort of home and friends. You are constantly off balance. Nothing is yours except the essential things – air, sleep, dreams, the sea, the sky – all things tending towards the eternal or what we imagine of it.” – Cesare Pavese

“A traveler without observation is a bird without wings.” – Moslih Eddin Saadi

“A good traveler has no fixed plans and is not intent on arriving.” – Lao Tzu

“He who does not travel does not know the value of men.” – Moorish proverb

“Travel is more than the seeing of sights; it is a change that goes on, deep and permanent, in the ideas of living.” – Miriam Beard

“We live in a wonderful world that is full of beauty, charm and adventure. There is no end to the adventures we can have if only we seek them with our eyes open.” –Jawaharial Nehru

“Do not follow where the path may lead. Go instead where there is no path and leave a trail” – Ralph Waldo Emerson

“A journey of a thousand miles must begin with a single step.” – Lao Tzu

“I have found out that there ain’t no surer way to find out whether you like people or hate them than to travel with them.” – Mark Twain

“Once you have traveled, the voyage never ends, but is played out over and over again in the quiestest chambers. The mind can never break off from the journey.” –Pat Conroy

“Too often travel, instead of broadening the mind, merely lengthens the conversation.” – Elizabeth Drew

“Wandering re-establishes the original harmony which once existed between man and the universe.” – Anatole France

“I travel a lot; I hate having my life disrupted by routine.” – Caskie Stinnett

“What you’ve done becomes the judge of what you’re going to do – especially in other people’s minds. When you’re traveling, you are what you are right there and then. People don’t have your past to hold against you. No yesterdays on the road.” –William Least Heat Moon

“I soon realized that no journey carries one far unless, as it extends into the world around us, it goes an equal distance into the world within.” – Lillian Smith

“Travel does what good novelists also do to the life of everyday, placing it like a picture in a frame or a gem in its setting, so that the intrinsic qualities are made more clear. Travel does this with the very stuff that everyday life is made of, giving to it the sharp contour and meaning of art.” – Freya Stark

“The first condition of understanding a foreign country is to smell it.” – Rudyard Kipling

“Adventure is a path. Real adventure – self-determined, self-motivated, often risky – forces you to have firsthand encounters with the world. The world the way it is, not the way you imagine it. Your body will collide with the earth and you will bear witness. In this way you will be compelled to grapple with the limitless kindness and bottomless cruelty of humankind – and perhaps realize that you yourself are capable of both. This will change you. Nothing will ever again be black-and-white.” – Mark Jenkins

“When we get out of the glass bottle of our ego and when we escape like the squirrels in the cage of our personality and get into the forest again, we shall shiver with cold and fright. But things will happen to us so that we don’t know ourselves. Cool, unlying life will rush in.” – D. H. Lawrence

“Perhaps travel cannot prevent bigotry, but by demonstrating that all peoples cry, laugh, eat, worry, and die, it can introduce the idea that if we try and understand each other, we may even become friends.” – Maya Angelou 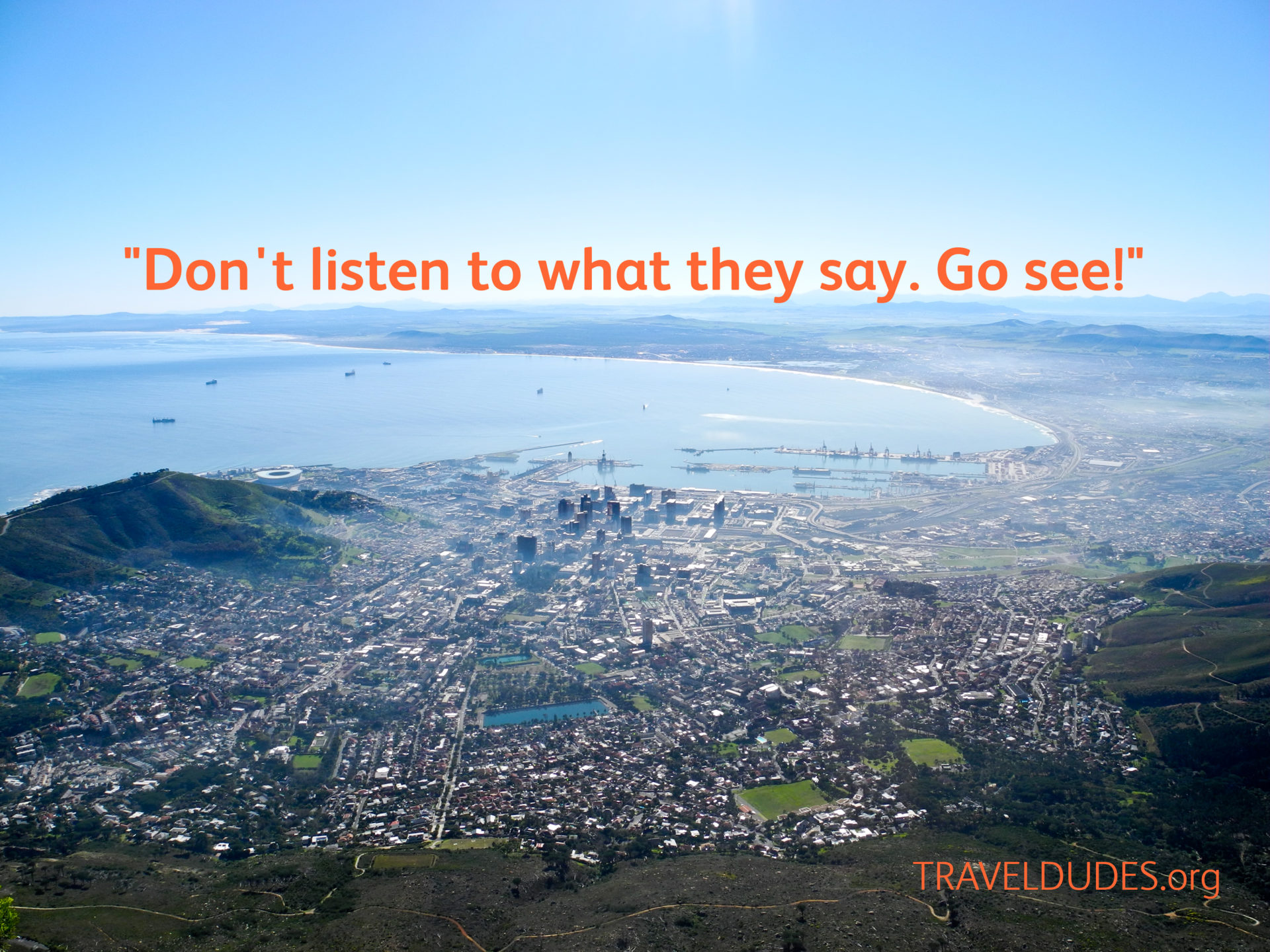 Things to see in Death Valley and Furnace Creek

How To Travel On A Budget