If your planning a trip to Sydney from October to December then you should definitely put whale watching on the top of your “things to do in Sydney” list.  This is the time of year humpback calves are escorted by their mothers, and sometimes a second female, to the southern feeding grounds of Antarctica, a migration route that is just off Australia’s east coast.  It’s the best two for one, or three for one if you’re lucky, package in town.

Humpback calves are like most children, curious about new things.  A calf will often start mugging, approach boats to get a closer look, which is awesome for those on a whale watching cruise as the calves tend to get quite close to the boats.  There are regulations on how close the boats can get to the whales but there are no regulations for how close whales can get to boats.  Or at least no one has told the whales.

Whale watchers often get an extra show from a calf due to the attention the calf is receiving and its need to release bottled up energy.  Humpback calves can be quite frisky and if you’re lucky you’ll see a tail slap, or a breach, or even a spyhop (when a whale rises out of the water partially and holds that position).  But let’s not forget about Mom.  Being a good chaperone she will put herself between her calf and the boat full of eager onlookers.  This is often a great photo opt for those camera-ready whale watchers.

A few weeks ago, mid-October, I was lucky enough to be on a whale watching cruise and saw an albino humpback calf and mother migrating south.  As you may have guessed, albino whales are very rare.  There is one albino humpback whale that is quite well known in Australia, even has a couple websites dedicated to him.  The whale watching cruise I was on was first to spot the whales but it wasn’t long before several other boats showed up to get a closer look at the albino calf.  There was even a helicopter from the local news station on the scene.  All the attention did not stop the calf from a tail slap or two plus some mugging for the photo hungry tourist on board.

Don’t have the time or the funds for a whale watching cruise?  Not to worry, during the October to December southern migration the mothers and calves tend to swim very close to the shoreline and can often be seen directly from land.  They often stop in protected areas along the coastline and beaches to rest and feed.

The South Coastal Walk from Bondi to Coogee is an excellent area for spotting whales.  If your planning on taking the ferry to Watson’s Bay to try some of Doyle’s famous fish and chips, as recommended by most of the guide books, then consider the coastal walk around the Inner South Head of the Sydney Harbour with a stop at Gap Park for some coastal whale watching. 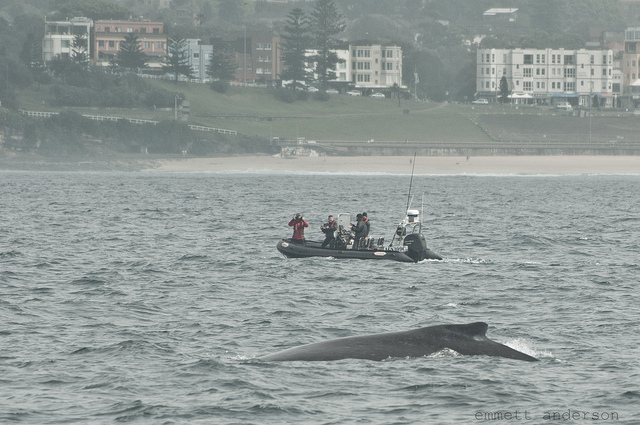 Diving Spots in the Philippines